skip to main | skip to sidebar

been a while i created this little guy. i actually thinked about him in my very first character sheet of Karmakat, so that gives an idea of how long it's been. just back then he didn't even had his own character sheet, just an appearance in karmakat's character sheet.
and well until now i didn't had it to make a better one just for him.
but now that i started my own story, and since he got an important role in it, i thought he really deserved his own character sheet.
i would bet that most people don't really know him but well there he is hehe.
he got several appearances inside the story i am writting.

and even if he doesn't talk he is a very reliable partner in fights.
as his names means, Seiichiru is a "star of hope" in the darkness. hehe

so well yeah am not the best in drawing those but i think it came out not to badly. 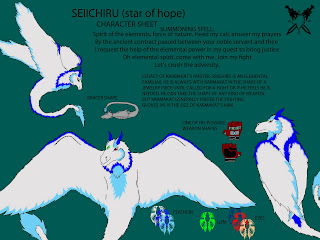 you can say this is also a way to motivate me in a way to face it with the "family" but that is another subject.

i wish you all to spend those holydays celebration with the people you love or at least to have a great time with all my heart everyone.

this been a pretty interesting year for me. Some good stuff and some disappointments but well it's part of life no? 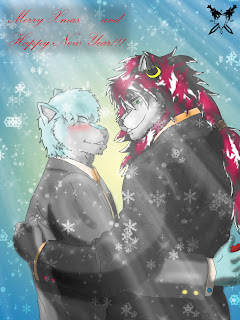 Posted by Karmakat at 7:58 AM No comments: 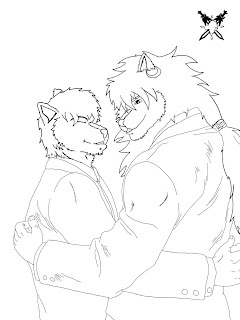 here is my idea for a xmas and new year so far
this is just a wip i will color it asap
Kat
Posted by Karmakat at 9:35 AM No comments:

little more informations about me

just want to let you all know that am open to commssions and trades so don't hesitate to contact me.

the websites where i post more often my work are
http://www.furaffinity.net/user/karmakat/
http://karmakat01.deviantart.com/

i wait to know all of you and ure suggestions on my work :)
kat

Karmakat
well am a french lion that trys to get better at his art and waits for your comments . i dont bite dont hesitate to ask me something or to contact me lol ) am opened to trade and commissions too.

blog vs webpage? wich one is best ?

Subscribe to get news from the black lion den